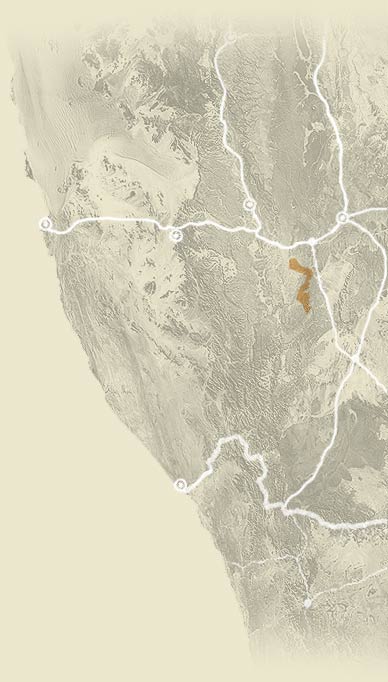 Namibias south is dominated by the two deserts: the Kalahari in the east and the Namib in the west. A rugged mountain range with peaks up to 2000m high separates both and marks the border of the African plateau. Aridity, rough desert and semi desert landscapes, mountains and endless plains characterise this land. Only a few rivers that carry water irregularly streak the area, of which one is the Fish River. For thousands of years it dug deep into the rock and thereby formed the world's second largest canyon.

The Vogelstrausskluft area stretches along the Fish River Canyon on the western edge of the Kalahari - the eastern farm border is marked by the middle of the riverbed. Its location in the centre of the south, close to the road from Lüderitz to Keetmanshoop (B4), makes it a perfect starting point to visit many of the most interesting sites in a days- or short safari trip: